Before we dig into the lesser known but important facts, I want to provide little background about the SQL Server Columnstore index. This feature was introduced in SQL Server 2012, but remains largely unknown. As the name suggests, a data page will store values only for the given column to which that page is allocated. Generally, rows are storage in a page, and are called as RowStore. The ColumnStore index feature is designed to optimize access to large data warehouses workloads.

Here is a typical RowStore pages. Let us say we have 2 columns and each page would fit 5 rows; in this case we would have data for all columns and 5 rows in each page.

Columnstore indexes store data column-wise, and each page stores data from a single column. If we have ColumnStore, then the page would look like below.

Each column would be accessed independently and SQL Server would fetch only the needed columns based on the query. You can imagine that this can dramatically decrease I/O performance.

If we compare the two images above and perform Select sum(Column1) from Table then we won’t unnecessarily bring Column2 data in memory.

Here is the code to understand this. 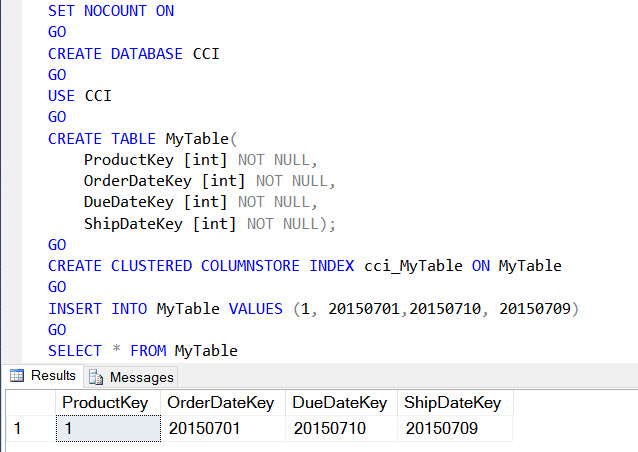 Hints to force use of ColumnStore Index

There are a few situations where a developer wants to override the decision made by the optimizer. There are hints available in SQL Server which can cause the optimizer to forcefully use the ColumnStore index. Before we take this approach, we need to make sure that we use the hint sparingly and understand the implications of using it. Here is a demo to show the hint IGNORE_NONCLUSTERED_COLUMNSTORE_INDEX. If you want to use the script, you need to download Sample Database from codeplex http://msftdbprodsamples.codeplex.com/releases

Now we would populate table with a lot of records. This is where you need the sample database. In AdventureWorks database there is a table called Sales.SalesOrderDetail and we will use that.

Next, execute the queries shown below. Note that second one is having hint to ignore the ColumnStore index. 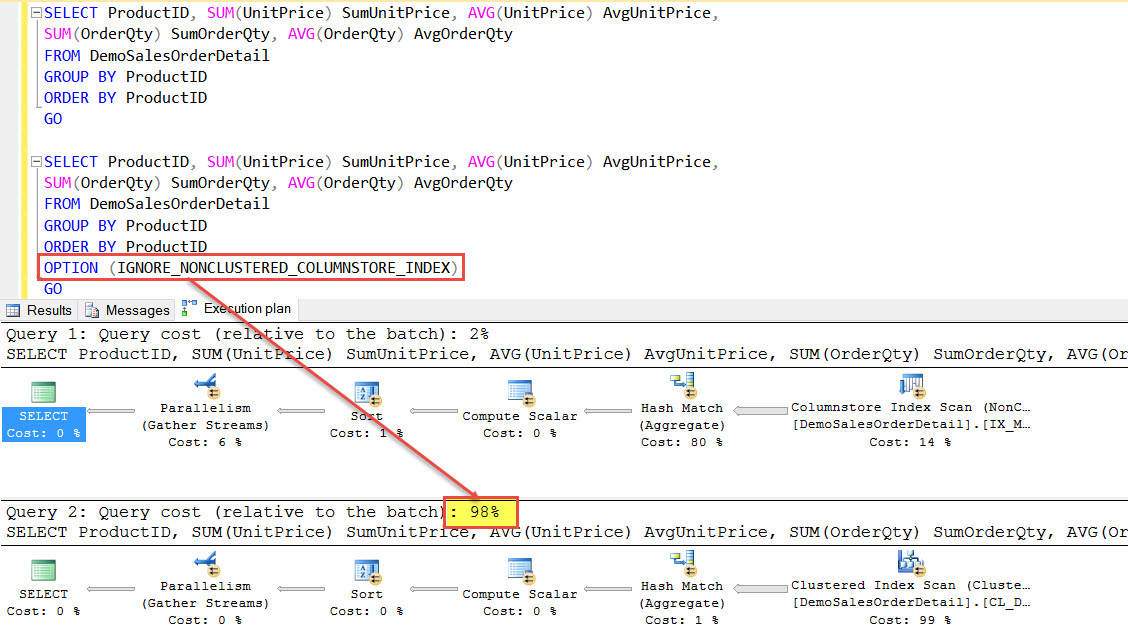 We have shown example where forcing to non-use of ColumnStore index is causing sub-optimal query performance (the cost is 98% vs 2%). This is done purposefully to demonstrate that we need to make sure that we test the query with and without the hint, and then select the best option after review.