SSMS has a number of core changes compared to earlier versions of SSMS. First, SSMS 2016 is now based on the Visual Studio 2015 Isolated Shell. It includes a wizard for the new Always Encrypted feature and a new quick launch toolbar to quickly find different menu items. SSMS 2016 also includes a new SQL PowerShell module and new cmdlets that work with Always Encrypted, SQL Agent, and SQL Error Logs. There’s also a new activity monitor with filtering and automatic refresh. For a complete list of all of the features in SSMS 2016 you can check out Features in SQL Server Management Studio

Microsoft states that there is no specific restrictions for using SSMS 2016 with SQL Server 2000 or SQL Server 2005 but all of the features may not work properly. 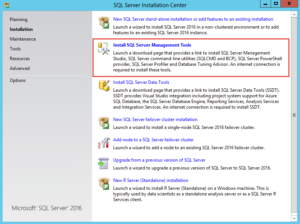 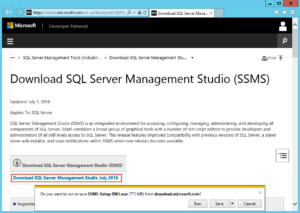 Clicking the Download SQL Server Management Studio July 2016 link will prompt you to Run or Save the SSMS-Setup-ENU.exe program that you can see in Figure 2. If you choose the Save option the SSMS-Setup-ENU.exe setup program will be saved to your Downloads folder. Then you can click Run after the download completes to display the SSMS 2016 installation screen that you can see in Figure 3. 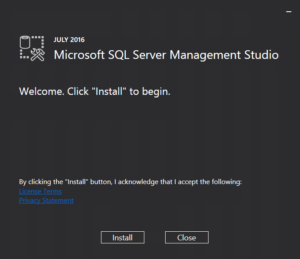 Clicking Install will launch the SSMS 2016 setup process. The setup takes several minutes as it installs the .NET Framework 4.6.1 and the Visual Studio 2015 isolated shell as part of the SSMS 2016 setup. The system required a restart following the SSMS 2016 installation. The SSMS setup logs are stored in the %USERPROFILE%\AppData\Local \temp\SsmsSetup directory. The logs can be used for troubleshooting if you encounter errors during the installation process.

Unlike earlier versions SSMS 2016 automatically checks online for updates. You can also manually check for updates using the Check for Updates option on the Tools menu. You can see SSMS 2016 in Figure 4. 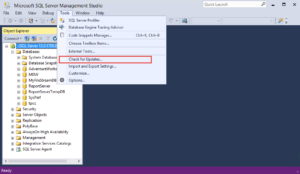