With the SQL Server 2016 release the former Data Dude capabilities have been incorporated into the main Visual Studio family and the BIDS feature set is now the new SQL Server Data Tools (SSDT).

SSDT 2016 supports development for a number of different SQL Server releases including:

SSDT 2016 can run on the following operating systems: 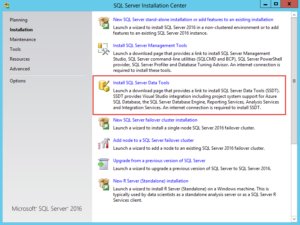 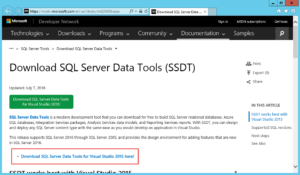 Clicking on the Download SQL Server Data Tools for Visual Studio 2015 here! will display the second download page that you can see in Figure 3. 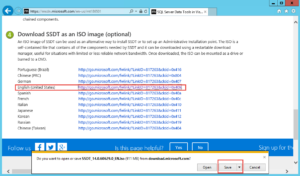 This page enables you to optionally create an installation point on a network share or you can simply scroll down and select the download image you want to install. In Figure 3 you can see that the English language image has been selected. You will then be prompted to open or save the ISO image. By default, saving the SSDT_14.60629.0_EN.iso image will copy it into the system’s Downloads directory. After the download completes clicking Open launches a Windows File Explorer window which will have expanded the ISO file. Then you can run the SSDTSETUP.EXE program to start the SSDT 2016 setup process that you can see in Figure 4. 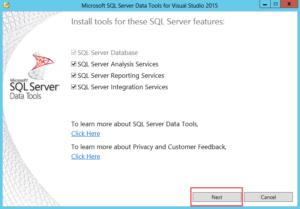 The first SSDT 2016 installation screen enables you to select the different features you want to install. By default all of the boxes are checked. Clicking Next displays the Microsoft Software License Terms dialog that you can see in Figure 5. 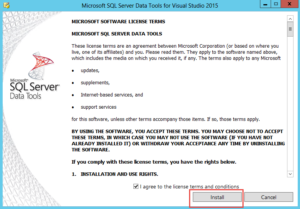 Check the I agree to license terms and conditions box and then click on Install to begin the SSDT 2016 installation process. The installer will run through a number of steps including installing SQL Server LocalDB, the SQL Server DB OLE DB Providers and the Microsoft Visual Studio 2015 Integrated Shell.

Selecting the File, New, Project option will display the SSDT project templates that you can see in Figure 6. To start a new project simply select one of the templates and give it a name. SSDT will add a new project to the Solutions dialog and you can begin working on your BI project. 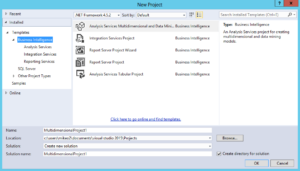