IN vs. OR: Which performs better?

The title describes what I started up to do, but as usual, I like to experiment with queries to see if I can beat the optimizer for an acceptable query plan. Initially I thought the OR clause described below would be the best solution, but with a little experimentation, I found the order of columns in an IN clause does have a profound effect.

The other day I encountered the following query in a client’s database:

And its performance was just terrible, especially looking at its query plan:

FYI: dbo.Consumer has 61.5 m rows and dbo.ConsumerPhone has almost 106m rows. There are also the following indexes (all with DATA_COMPRESSION = ROW):

But if I reverse the order of the parameters in the IN clause, as shown below: 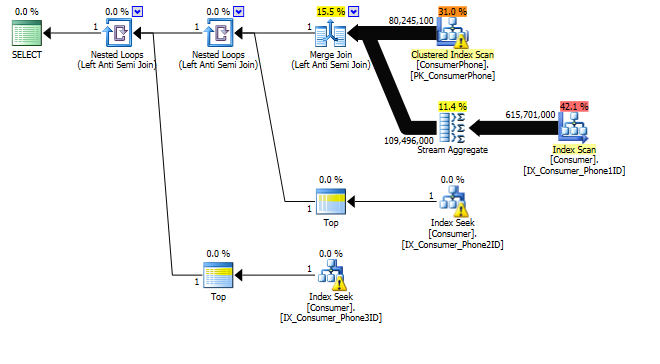 Hmmm, interesting. Just changing the order of the parameters in the IN clause gives us a different query plan with an estimated cost of 3179 (almost half the previous cost). Note the two Index seeks:  IX_Consumer_Phone2ID and IX_Consumer_Phone3ID.

So, even though I am not thrilled with using ORs for performance, I rewrote the query just changing the NOT EXISTS subquery as shown below:

We now get the following query plan. Note that now we have index seeks on two of what were scans: 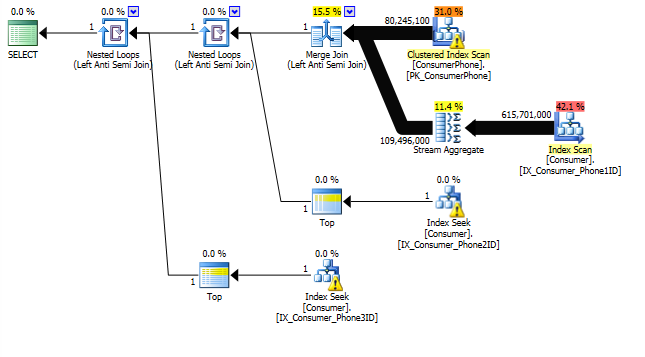 So, the second and third queries ended up getting same query plan with repetitive performance. What is really interesting is that just changing the order of the column names in the IN clause caused a significant change in query plans and performance.

As always, you must test, test, test! In this case, the inquiring mind might just come up with something better than Microsoft®!