Here are the rules Oracle uses to execute each query, and the order in which execution takes place:

The order of execution is important because it has a direct impact on the performance of your queries. In general, the more records that can be eliminated via the WHERE clause, the faster the query will execute. This performance benefit is because of the reduction in the number of rows that must be processed during the GROUP BY operation.

For example, suppose you have this query: 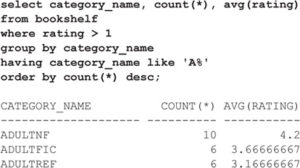 The order of execution would be as follows:

1. Eliminate rows based on

2. Group the remaining rows based on

3. For each CATEGORY_NAME, calculate the

4. Eliminate groups based on

Because the HAVING condition in this example is not based on a calculated column, it is easily changed into a WHERE condition: 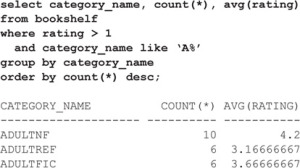 This example may seem trivial because the table has few rows in it. But even such a small query can have a significant impact in a production application. There are many examples of production applications whose performance is severely impacted by high volumes of executions of seemingly small queries. When those small queries are executed thousands or millions of times per day, they become the most resource-intensive queries in the database. When planning the SQL access paths for your application, tune even the small queries.