In the previous article we considered the issue of managing small data volumes when working with Oracle LOBS and thinking about I/O tuning.

Another critical performance question is how all operations with such large data volumes will impact the buffer cache. Oracle provides enough flexibility to adjust the caching option in a number of ways:

First, it makes sense to check the effect of switching from BasicFile to SecureFile: 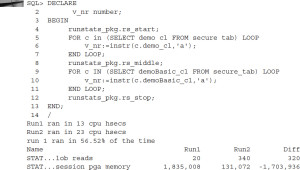 The next test checks the effect of CACHE vs. NOCACHE for SecureFile. Considering that the CACHE option makes sense only if the same data is being accessed multiple times, the following test attempts to read exactly the same CLOB 20 times: 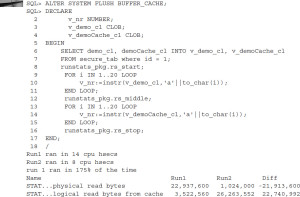 In this case, you are trading logical reads for physical reads. Of course, logical reads are faster and you will achieve performance benefits. But this works only as long as you do not have to worry that LOB operations are pushing more frequently accessed data blocks out of the buffer cache. In general, you should enable the CACHE option only if you are sure that this data is constantly needed. Otherwise, by speeding up LOB operations, you may slow down everything else.

In the final article in this series, we will consider logging modes.