The different modes of setup for Oracle 12c Data Guard allow for different configurations that are adaptive and that are dependent on available hardware, processes, and ultimately business needs.

Maximum protection is designed for zero data loss, while the redo transport is synchronous. Synchronous transport means that you’re applying the database transactions at the same time on the primary and secondary database servers. The primary waits for a response telling it that the transaction has been applied to the standby database before it commits the transaction. Having two standbys or even a RAC setup on the secondary site is recommended in this situation because if the standby fails, the primary will be halted in this mode.

Maximum availability also has the goal of zero data loss (again, with the redo transport being synchronous). The difference is that if the standby fails or if there is a connectivity issue, it will allow the primary to continue and the standby to fall slightly behind. It is not as critical to have more than one standby for this mode because of the fault tolerance.

It can be especially hard with discussions regarding costs and business expectations to come to an agreement on which mode to use. It is probably simplest to set the protection mode; the ability to use the standby server in very practical ways should help defray concerns. To set the protection mode for the database, issue the following statement:

The Oracle Database 12c now allows for confirmation that the transaction has been received even if still in memory with the NOAFFIRM attribute. FASTSYNC doesn’t wait for the actual write because if the system has slower disk or I/O contention, it will be able to receive the information the transport executed. FASTSYNC allows the primary database to perform as expected in a maximum available configuration and not be dependent on I/O performance of the standby database.

Each mode has different services that take care of the transport and application:

Figure 1 shows a configuration of the Data Guard environment and how the primary and standby servers do not even need to be in the same location. The servers can be in the same data center, down the street, or cities apart from each other, depending on the purpose and need. Having the servers in a different city provides high availability even in the event of a disaster in the location of the primary database. Also in Figure 1, notice the options that are available for the standby server to use, such as reporting, system testing, or even running backups, to take this type of load off of the primary server. 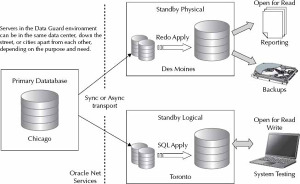 When using a snapshot database with SQL Apply, stopping the apply of the SQL statements is not necessary because the standby is kept synchronized by having the same SQL applied on both the primary and the standby. So, while the standby is still being synchronized, it is also available for queries, running reports, or backups. The commands shown here for setting up the standby for read access are not necessary, but are done during the initial setup to show that SQL Apply is being used: