What You Should Know About MySQL Replication

Replication in MySQL is the dynamic process of synchronizing data between a primary (master) database server and one or more secondary (slave) database servers in near-real time. Using this process, it’s possible to create copies of one or more databases so that even if the primary server fails, data can still be recovered from one of the secondary servers.

Replication is essential for many applications, and the lack of replication support was a major drawback to MySQL compared to other relational database management systems (RDBMSs). MySQL 3.23 was the first version to introduce replication support, and support has improved continually in subsequent versions. However, MySQL is still best suited for one-way replication, where you have one master and one or more slaves.

As much as possible, try to use the same version of MySQL for both the master and slave server(s). A version mismatch can sometimes result in erratic replication behavior

Why replication? There are four common reasons.

Now that you have an idea why you might want to set up replication, let’s look at some of the concepts on which it’s based.

As previously stated, replication requires at least two servers. The servers are set up such that the first server, called the master, enters into a relationship with the other server, called the slave. Periodically, the latest changes to the database on the master are transferred to the slave. Through this replication relationship, an updated database can be propagated throughout an enterprise into multiple slave servers, but only one master can be in a replication relationship at any one time. It’s also possible to “promote” a slave to a master, if necessary.

As a necessary prelude to configuring servers for replication, both master and slave servers must be synchronized so that the databases being replicated are the same at both ends of the replication connection. Once this is accomplished, it becomes critical for all updates to be done on the master, and not on the slave(s), to avoid confusion about the sequence of the updates.

Once the master and slave servers are configured, the process begins with the slave contacting the master and requesting updates. Permissions for this must be enabled on the slave server(s). The slave informs the master of the point in the binary log where the last update occurred, and then it begins the process of adding the new updates. Once completed, the slave notes where it left off and connects periodically to the master, checking for the next round of changes. This process continues for as long as replication is enabled. Figure 1 illustrates this relationship. 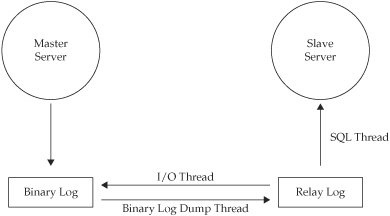 The relay logs on the slave are in the same format as binary logs. Once all the events in the relay log are executed, the SQL thread automatically deletes the log. A new relay log is automatically created when an I/O thread starts. It’s worth pointing out that MySQL replication is asynchronous and so the slave needn’t be connected to the master all the time; it has the capability to keep track of where it left off and automatically get itself current, regardless of how much time has passed since the last update took place.

The reason for two separate slave threads? Performance! By being independent of each other, the processes of reading and writing on the slave can occur simultaneously. Because the execution of the SQL commands on the slave takes longer than reading and copying the binary logs to the relay logs, splitting these two functions also makes sense in terms of efficiency on the master. The binary logs can be safely purged from the master because a copy of them already exists on the slave, even if all the updates to the slave haven’t yet been committed.