Migrating an Oracle 12c Instance from Regular Storage to ASM

Migrating an Oracle instance from regular storage to ASM is actually a simple task, but only if the ASM instance has already been created. Using Oracle Enterprise Manager is probably the most straightforward way to do this.

Start by opening up Oracle Enterprise Manager and choosing the option to migrate to ASM. The screen shown in the following illustration is what comes up after you select to migrate to ASM. Migration requires you to first choose the files to be migrated, which, of course, include database files, but can also include recovery type files, such as archive logs and backup and control file copies. If not chosen, the log files and control files will remain on the current disk. 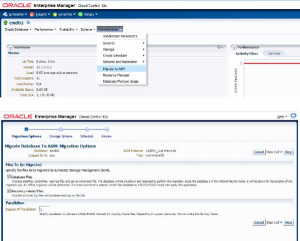 The next screen has options for choosing the disk groups that this database should migrate to. 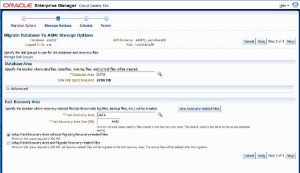 The job can be scheduled to run as needed with the settings in the following screen. This does require some downtime of the database to run the migration. The next step summarizes the selections, and then the final step is to submit the job, as shown next. The migration job can be monitored in OEM. 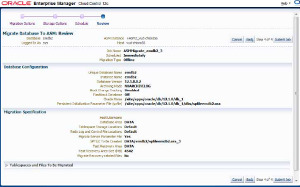