Performance is always one of the DBA’s top priorities, and there’s one thing every DBA knows about SQL Server® performance: if there’s a problem you’re going to hear about it. It’s far better to be proactive and stay in top of your system’s performance than it is to be reactive when it comes to addressing user complaints. However, SQL Server is a complex system and getting to the root of performance problems can be difficult. There are a lot of different factors that can impact SQL Server performance, ranging from hardware and system configuration settings to poor T-SQL query practices. In this article, I’ll cover some of the most common causes of SQL Server performance problems and some of the best practices to avoid them.

There’s no doubt that server hardware can have a huge impact on performance. This is true whether you are running SQL Server on a VM or if you are running on a physical system. There are three main pillars for SQL Server hardware performance: CPU, memory, and storage. As a rule of thumb, faster processors are always better. However, processor speed has plateaued and CPUs now typically increase processing power by adding more cores. While more cores can definitely help system performance, it is important to realize that not all processes can benefit from multiple cores. For instance, a single threaded process, like many applications, will always only use one core so multiple cores won’t help. If you’re running SQL Server as VM in a server consolidation environment, it’s a good idea not to overcommit the physical cores on the host system. This will help ensure that there’s always available processing power for the SQL Server VMs.

While adding RAM will speed up performance, if the system is memory-constrained it’s important to realize that adding RAM is not a silver bullet for all performance issues. Adding RAM won’t fix poorly written queries or blocking and locking situations.

Storage also plays a vital role in SQL Server performance, and for many systems today, storage has become the main system bottleneck.  Many of today’s tier one server systems have multi-core processors and support very large amounts of memory. Some of the enterprise server platforms support more than 200 cores up to 48TBs of RAM. Connecting these high-powered servers to an older storage subsystem often means the storage can’t keep up with the rest of the system. Some important performance counters for monitoring your storage include:

The SQL Server database storage configuration can also play a big part in performance. By default, the SQL Server installation program puts both the data and log files on the system drive. Typically, they are stored in a location like C:\Program Files\Microsoft SQL Server\MSSQL13.MSSQLSERVER\MSSQL\DATA. This is not the best configuration and it will quickly cause I/O contention in all but the most modest workloads. Data files tend to support more read operations with more random access, while transaction logs have a high level of sequential write access. For SANs and HDD storage, a best practice is to move the data and log files onto separate physical drive arrays. If you are using flash storage or SSDs, it might be possible to have both on the same drive, but you need to be sure your Disk Sec/Reads and Write are around 1-2 ms.

Another not so obvious area that you need to check into is the BIOS and operating system power settings. By default, most systems come with this setting set to balanced, which means that the system will attempt to conserve power by cutting CPU processing speed. The balanced setting can reduce available processing power to about 75% of maximum. This is never what you want for a production SQL Server system. On a physical system, you need to check the actual system BIOS to adjust the power setting. The Windows® Server® operating system also has a power setting that you can access by going to Control Panel, Hardware, Power Options. This will display a dialog like you can see in Figure 1. 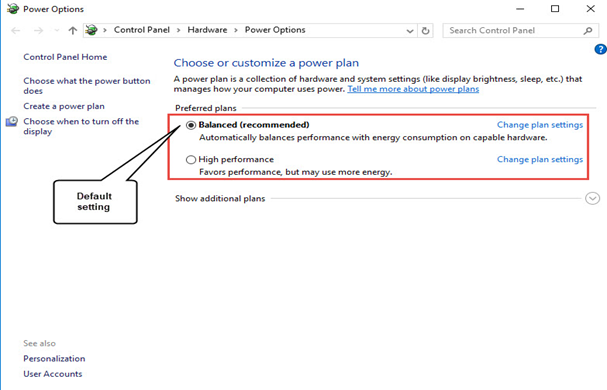 By default, the Windows power plan setting is set to Balanced. To make sure your system is delivering all of the performance it’s capable of, you should change this setting to High performance.

Following some of these best practices for system configuration and setup can help you avoid some of the most common SQL Server performance problems.